Sandhill Cranes and Cinnamon Teal and the importance of the San Luis Valley to these species. Dan Collins and Dave Olson, U.S. Fish and Wildlife Service Office of Migratory Birds

Cinnamon Teal and Water; History of Waterfowl in the San Luis Valley 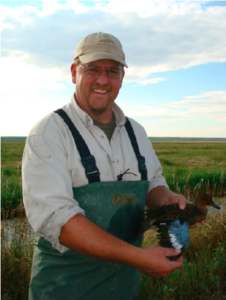 Dave will talk about the history and importance of waterfowl and wetlands in the San Luis Valley, Colorado.  Specifically, he will focus on the cinnamon teal research that the U.S. Fish and Wildlife Service (FWS) and partners have been doing since 2012 across the Intermountain West which includes Monte Vista NWR and the San Luis Valley.

Bio: Dave has been a wildlife biologist for 27 years of which 23 he has worked for the U.S. Fish and Wildlife Service and has focused on waterfowl and wetland ecology.  He has worked at FWS and USGS science centers in Maryland, Wisconsin, and Montana.  Dave has worked for the Peregrine Fund in TN and as a goose biologist for N.J. Fish and Game.  He has worked as a refuge biologist on national wildlife refuges in Virginia, Montana, and Michigan.  Currently, Dave is the regional migratory game bird coordinator for Region 6 of the USFWS based in Denver, CO.

The San Luis Valley, jumping off point for the Rocky Mountain Population of Sandhill Cranes and the importance of Private and Public lands. 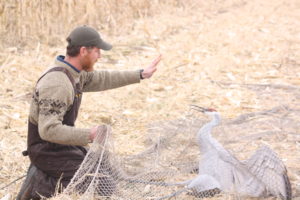 The Rocky Mountain Population (RMP) of Greater Sandhill Cranes (Grus canadensis tabida) recovered from low numbers in the early 1900s (≈ 150-200) to >21,000 cranes by 2008. Fall population estimates indicate that the size of the RMP has been relatively stable since 1995, but recently there is concern that habitat fragmentation, changes in agricultural practices, and low recruitment have had an impact on the RMP.  The San Luis Valley is a critical area for RMP sandhill cranes during both migration events due to it’s proximity to breeding and wintering habitats. Our project objectives were to identify and link movements and habitat use to managed and unmanaged lands to understand their role in the larger landscape.

– I am employed by the U.S. Fish and Wildlife Service as the Southwest Region Migratory Bird Coordinator.

– I live in NE Albuquerque with my wife, Julia, son Daniel (10 years old), daughter Evelyn (7 years old), daughter Emily (2 years old) and yellow labs Abby and Pearl. Outside of work I enjoy long distance trail running, photography, hiking, backpacking, hunting, fishing, and anything else that gets me/us out the door.