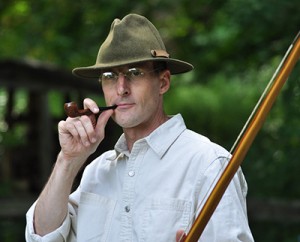 Jim is best known for his nature-based personal tales ranging from too-close-for-comfort black bear encounters, to the significance of sweet tea in southern society. His work has been called “avant-garde and old fashioned at the same time.”  His show, Aldo Leopold – A Standard of Change, continues to find success around the country in theaters, conferences, universities, and festivals. Currently, Jim is exploring the American chestnut blight, moonshining, for a new show set in southern Appalachia.

After spending his youth exploring the Tennessee River Valley around Chattanooga, TN, Jim spent his twenties roaming the west in an old Volkswagen Bus.

Jim says he would rather paddle a canoe than drive a car and prefers watching birds to watching television.

Tim grew up in the Midwest before joining the US Navy. He earned his Bachelor’s degree from Mesa State College in 1986, and his Masters and Ph.D. degrees from the University of Massachusetts, Amherst. After teaching in Iowa for five years, he returned to Colorado in 1996. Since then, he has taught vertebrate ecology at Adams State University and worked on local conservation efforts. He has served as the president of the Friends of the San Luis Valley National Wildlife Refuges since the group was founded in 2000.

My background for this position is non-traditional. As an artist and writer, I have written three books in another field and published numerous articles, including peer-reviewed manuscripts. Back in 1988, I met and fell in love with an educational Red-tailed Hawk. I began working as a volunteer for a local conservation organization, and it wasn’t long before I became a staff member writing training manuals, grants, editing their newsletter, etc. However, it was education that was my first love, followed by field research. Today, I thoroughly enjoy all aspects of Hawks Aloft, from working in the field studying nesting raptors along the Rio Grande bosque and songbird surveys to education programs to working with our large cadre of non-releasable education birds. I have been thrilled to write not only technical papers but also articles about birds and nature for the general public.  In my other life, I am a professional quilt maker and often travel to teach and lecture methods that I have developed in this media. My leisure time is often spent outdoors, searching for birds and more birds, but my dogs and I also enjoy the peace and quiet of our mountain home (and the birds).

Margaret was born in a humongous castle in Vienna in 1978. She has a Ph.D. in Theology from Cambridge (1981), one in Renaissance banjo from Julliard (1982), and a third in Rocket Science from MIT (1983). After inventing fire and discovering the meaning of life, she corrected the earth’s magnetic field, taught Julia Child how to cook, and served as a special envoy to Mars. In-between she spent over 40 years as an archaeologist in the Midwest, Northern Plains, Rocky Mountains, and Southwest. Although she has a net worth of just over 9.37 billion dollars, she enjoys working as the Regional Historic Preservation Officer for the U.S. Fish and Wildlife Service so she can “better relate to the working class”. Her favorite color is an orangish-lavender and she hates pineapple.

Meg  has a BA in anthropology from the University of Missouri and an MA from Northern Arizona University (also anthropology). Her primary research interests are the archaeological remains of prehistoric plant use and Depression-era buildings and structures. She’s been doing archaeology for 43 years with the first 16 years working with universities and as a consultant, followed by sixteen years at the Office of Archaeology and Historic Preservation within the Colorado State Historic Preservation Office. For the past 11 years she has been the Regional Historic Preservation Officer / Archaeologist for Region 6 of the Department of the Interior’s U.S. Fish and Wildlife Service.